I am not your typical street art lover. Or I shall clarify I don’t like jerks!
I know that “street art” is a generic term and that there are various subcategories, based on different techniques, origin, etc., but for non-art experts, common people as trivial and simple as I am, street art, in most cases simply means… those who cram the wall of a house, the door, a business entrance, historical monuments, etc., with your senseless graffiti made with a spray paint can.
However we can’t really assume that is the case for all of it. In fact we shall not generalize.
Let’s stress and emphasize that not all street artists are as such.
Many (and I would love to think it’s most of them) put their talent at the service of people and cities. Have you ever thought about it?

With their art, they do transform bad and degraded areas into some now worth visiting. Almost like seeing a rainbow right after a storm.
My encounter with URBANSOLID’s work was just as such. A colorful rainbow shining over the grey of Milano.
I was in a car at a traffic light, on an ordinary week day, immersed in my thoughts, working around the clock, trying to make it to my next appointment and with a bit of stress (typical attitude of the “Milanese” typical ride)… when my eye fell on the pylon of an overpass where I saw Wonder Woman looking at me…!!!  And on its side there was Spiderman and Hulk on the other!!! I do love cartoon characters!!!
I broke out and I remember saying, “And who are these??? What the hell …??” And then, the green light came on, so I had to keep going. Smiling, cheerful and feeling tremendously curios, to find out more about these full-size Superheroes who have made my day better. I knew that I had to go back to that same traffic light with a camera which led to do more research on it.

It was not easy (none of the arts had any indications nor tags), but finally I was able to discover URBANSOLID, an art duo known for its three-dimensional graffiti type sculptures made of plaster, cement and resin stacked on the walls of, in this case, Milano.
(“Urban Solid” in English is the rejection of the large urban dimensions and the artists have decided to call themselves as such because they “abandon” their objects, their art on the street).
They have known each other forever. They studied together at the Arts High school and thereafter moved onto the Accademia of Brera. After an individual career they decided to team up as URBANSOLID, while choosing and preferring the streets as their exhibit spaces with the mission statement of making the arts accessible to all and not only those who could afford the museums entrance fee. 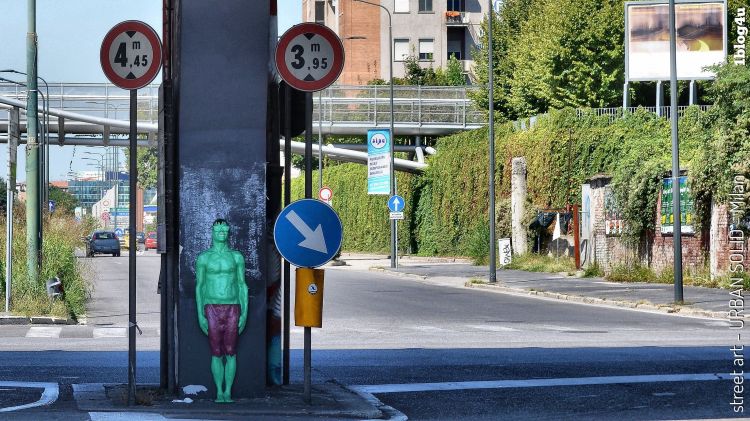 Another objective: improve certain areas by making them “artsy” prettier, perhaps highlighting the contrast between the abandoned and the beauty. Many cities to this date are currently hosting their work (Paris, London, Berlin, Prague, Turin, Florence, through Paris, Amsterdam, and Switzerland and Belgium) which one could find under a bridge’s pillar like it has happened to me.
They are always respectful of the layout of the cities by intervening only on those areas which are in need of improvement when it comes to its visual, such as dirty walls of abandoned buildings, perhaps on the verge of being demolished or that are waiting for an urban redesign and allocation. Most importantly they never damage permanently the buildings and the public structures they would work on.
Imagine a dark city such as Milan, where such a colorful art actually brings on some well needed joy and momentum.
They had started by laying their work on walls or on the road but soon to realize that their work could easily be removed or stolen hence the idea to glue them on the sidewalk and later to actually install them on the walls. A few art gallery owners contacted them to secure showings of their work on their premises or even to commission original artwork to acquire for their own personal living room collection. Great feedback indeed!

But URBANSOLID continue to bring their arts onto the streets. Italians are artists at heart.
The entire world envy the great taste we try to outfit anything we create but regretfully the nation does not possess the entrepreneurial spirit needed to invest and finance on the various forms of culture, which prevents us from gaining much needed economic benefits as well as being properly recognized. Long life and much success to URBANSOLID and special thanks to all of the urban realities abroad that continuously showcase and appreciate their work.