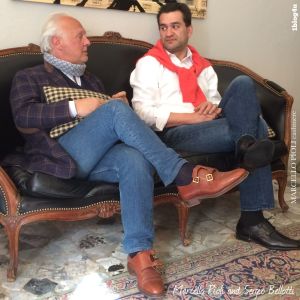 met Marcello Pioli about two or three years ago, attracted by a photo of one of his sweaters and the accuracy on a poncho design which led me, based on my typical curiosity to browse more and to look for additional photos, of his 100% Made in Italy handcrafted production. Up to to this date, so much went on but we did end up meeting in person and we have also organized an event in his shop in Parma along with a great artist (please take a moment to admire his work in the photo gallery section under his name, Giuliano Grittini). A great joint effort between the remarkable artist Giuliano Grittini and the handcrafted cashmere work of mr. Pioli. This interview happened by chance. Sergio Bellotti (Editor’s Note: partner and co-founder of 1blog4u and internationally renowned musician, currently on tour with The Platters and The Drifters and also faculty at Berklee College of Music in Boston) and I, decided to head down to Parma to greet him, while Sergio offered himself to model for his clothing line.. The purpose of my interviews, as we know, is not to write a sterile technical accomplishments and results of one person, but rather to describe the path he or she took, to get there.This is because I like the idea that anyone that might be reading what I write, can perhaps draw inspiration to fulfill their own dream. Enjoy the reading, whatever that dream of yours might be.

hen did it all start with that passion of yours for cashmere?

It was random. In 1978 while dating a girl whose grandmother was a professional knitter. It felt like an electric shock and had been hooked since and that’s truly how it all started. At first casually, just for fun (because I had gone there to get a sweater) and then seriously, until it become my profession.

But how did you start? What happened? How exactly did your adventure take off? Did the apprentice for someone?

No I started alone, by myself. Let’s say that the sweater I had commussioned her to do for my personal use, had great success among my friends, therefore started to help her growing the business, creating a very small trade line that gradually became larger. I started in an attic, buying my first knitting machine and collaborating with a knitter. I studied the various stages of manufacture of yarns which, as you know, is complex and requires care. Imagination is not enough. If you work in knitwear and want to achieve excellence, or at least a high quality, you have to constantly study and be very careful. Then slowly Im opened a laboratory with up to 10 machine, ten knitters, and all it being strictly handcrafted.

efore continuing we shall give some biographical notes about Marcello Pioli (Editor’s Note: a very interesting person who does not conducts marketing with a web site but rather with Social Media only). Who is Marcello Pioli? Where he born? Which schools did he attend?

I was born and raised in the wonderful and historic town called Parma. I am a true “parmigiano del sasso” as we say. (Parmesans are its citizens but it is important to make a distinction between a “Parmesan” and “Parmigiano del sasso” which in dialect it means “Parmesan” the were born from generations in a specific area of the ducal city. Also the residents of the greater area of Parma, finally, which are the ones that live around the province of Parma) I attended the Liceo Classico, no regrets but really not related to my future, which is now my present. All I did was following my path, my dream, my passion. No family tradition in knitwear. 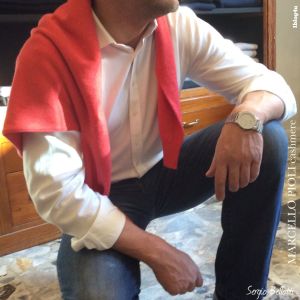 ere your parents approving your choices or did they raise any obstacle for you?

No obstacles at all. In the family there was no tradition in knitwear, but my mother never opposed it either. Indeed, I did receive economical support right from the beginning.

Why did you fall in love with cashmere and yarms versus other fabrics and materials?

The yarns fascinated me from the beginning. The art of knitting is endless, I think that is the right word to describe it… because of how many yarns, colors, patterns, and special procedures one could apply, let’s say that it opens up and leads itself to greater creativity. Cashmere, is something I got into in the 90’s because there was the crisis of traditional knitting and I chose to get into some that represented more of a small market niche. There were very few people working with cashmere and I am still happy with the choice I made.

How did it evolve from there after?

I decided to open a retail outlet on top of the workshop I had already set up for my production. I hai some issues with the proper permits but I was able to manufacture and to engage into direct sales. In fact I had hired a sales team to help me with sales domestically and internationally.

How is Parma? Open to your market ideas? A good market place?

I was born here and started in the business 37 years ago… there is a bit of competition but overall it gives everyone a chance to succeed.

ou are well known. Safe to say that your clients know you, some grew up with you and perhaps were schoolmates?

Parma is indeed a historic city, business friendly, rich and always considered a “vanguard city” and it surely helped to write the history of Italian fashion (Editor’s Note: we invite you to read a wonderful article by Valeria Garavaglia SPORTSWEAR OF VIA EMILIA – in the mid 70’s, thanks to a group of artists born between Reggio Emilia, Parma and Bologna, the contemporary casual sportswear and a style that has influenced and still inspire till today, not only Italian fashion, but also the international one) but because of this, the clientele is very, very demanding. Attentive to the quality and exclusiveness that should never be separated from the great taste, class and elegance. Yes of course. The target is the upper scale customers, the small circle of wealthy residents. But that alone should not foul you. A rich city does not mean guaranteed sales.

hy did you open a store by the beach in Pietrasanta?

At first I opened in Forte dei Marmi and then I moved to Pietrasanta. The reason is simple: to compensate with slow sales in the city during the summer months.

What do you mean with “compensate”? And why did you end up moving to Pietrasanta?

April through July are very slow months for my industry. Much better to close down in the city and open at the summer location instead. I can then count on lots of foreign tourism. Ironically, cashmere sales in July are happening. My work is very much appreciated by Americans, English and French and those who can appreciate the arts. Pietrasanta is exactly that type of place, a true paradise for those into the arts. In my case it is also a synonymous of friendship, the real one that neeed no words but facts rather. For example Mr. Michele Marcucci owner of the Enoteca Marcucci, who is responsible for my legacy with Pietrasanta. (Editor’s Note: it is a very well known fact that Marcucci and Pioli have a great “goliardia” friendship that never gets out of line).

Anyone that have inspired you? Even if not directly connected to your industry?

I would say that the overall taste and appealfrom the region I grew up in has been a huge factor. As I had before, think about guys like Guido Pellegrini, the creator of Martin Guy or perhaps Filippo Alpi. Or a stylist from overseas like Ralph Lauren. Otherwise when it comes to elegance and class I would say Mr. Barilla who in my opinion comes first, even when compared to a giant such as Gianni Agnelli.

Have you changed through the years? Any charges or overall evolution?

Of course. Let me say that I always keep up with the times but as far as overall taste and style I would say no. So much has changed for sure, including the needed volumes, but my identity and overall style has not.

there any style or trend you have not explored and you would like to?

No, like I said before I love Paul Smith and Ralph Lauren and as far as Italians go I do admire Brunello Cucinelli. Especially for his ethics. There are many inspirations but radical changes never.

When did you realize that this was a passion you could make a living out of? That this was your path and your life?

In the 90’s when I started working with cashmere. While in the beginning it all felt like a past time, almost an accident, all of a sudden, at that point, it felt like the real deal for me.

What helped you through tough times? Or who did it?

Cashmere helped me to get out of the crisis by specifically focusing on “custom made” work, something that had never been done before. As far as my personal life I have always been positive and a forward thinker. It does not help to cry, therefore I never do. I must say that my real friends always helped me to get through it. That has been my real asset.

And one last question with which we always end all of our interviews: would you have any advice to any young entrepreneur or anyone really that would love to start his/her own business and fulfill “the” dream.

In my field, to start from the basics is really a key factor. Think “apprentice”, speak with others in the industry, the pro knitters and all of those involved in materializing a given project. I would say the keyword is “learn” and again, never stop to do so. Lastly, experiment, go in depth, get informed, never stop believing in your vision and listen to those who do transform theory into practice.

Thank you Marcello for being available and your great hospitality. A very special thanks to Elisabetta Bovis, a great “cyber social” friend that we had the pleasure to meet as well, while in Parma.

These below are the contact to reach Marcello Pioli cashmere and trust me when I say that his Made in Italy is 100% unique!