MOVING DAY, second CD by bassist/composer Mark Wade, release on the Mark Wade Music label, follow-up to Wade’s acclaimed 2015 debut “Event Horizon”, documents evolution of his trio with pianist Tim Harrison and drummer Scott Neumann.
On their 2015 debut, “Event Horizon”, bassist/composer Mark Wade and his trio displayed an uncanny empathy and earned a warm reception from press, radio, and fans. MOVING DAY, his sophomore recording released by his label Mark Wade Music, showcases the evolution of the trio’s tight, seemingly telepathic interplay.
“We’ve had a chance to develop a sound and identity and an understanding of one another as an ensemble. We had some of that with the first CD,” he explains, citing his bandmates Tim Harrison, on piano, and drummer Scott Neumann. “But this CD, three years later, shows that we’ve really formed some strong chemistry together. By the time we got to the recording session, we had been playing some of these tunes live in front of audiences a number of times.” 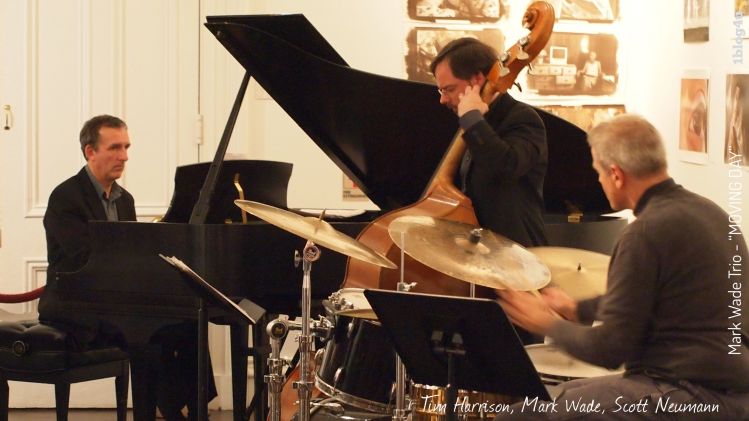 Wade started writing music for MOVING DAY a few months after the release of “Event Horizon”, and the new album includes seven harmonically and rhythgmically challenging originals as well as inventive arrangements of the standards “Autumn Leaves” and “A Night in Tunisia” (reinterpreted as “Another Night in Tunisia”). With the exception of “In the Fading Rays of Sunlight,” the gentle waltz that closes MOVING DAY, all of the selections utilize frequent meter changes.
The meter shifts are not immediately obvious, however, due to the way Wade, Harrison, and Neumann keep their performances flowing so perfectly. “There aren’t many tunes that don’t have at least one or two meter changes,” Wade explains. “It wasn’t my intention to do that. It was just kind of the way the music worked out.”

Mark Wade was born on December 29, 1974, outside Detroit in Livonia, MI. He taught himself to play bass guitar at 14 in Long Valley, NJ. During his senior year in high school in Morristown, NJ, he joined the Royal Nonesuch, a rock quartet for which he began writing original songs.
He attended New York University, studying with renowned bassist Mike Richmond, who encouraged him to take up acoustic bass for jazz and to hone his arco technique and sight-reading abilities in order to better play European classical music. He received a B.A. in music with a concentration in jazz in 1997.
Wade considers Mike Richmond, whose extensive resume includes work with Stan Getz, Jack DeJohnette, Lee Konitz, and Mingus Dynasty, a major influence, along with Ray Brown, Paul Chambers, Scott LaFaro, Michael Moore, and Red Mitchell.

Over the past 20 years, Wade has balanced his musical schedule between jazz, classical, and commercial gigs. His jazz credits include playing in the string section for the Jimmy Heath Big Band’s performances of Ernie Wilkins’s Four Black Immortals; backing singer Stacey Kent on The Today Show; playing with trumpeter Bill Warfield’s New York Jazz Repertory Orchestra; and recording with singer Elli Fordyce. Wade has performed with numerous classical ensembles, including the Key West Symphony backing guitarist Sharon Isbin and violinist Robert McDuffie, both of them Grammy winners. He is presently principal bassist of the Bronx Opera Company.
Bill Warfield, who directs the jazz program at Lehigh University (where Scott Neumann and Tim Harrison also teach), invited Wade to join the faculty in February 2017. The bassist commutes one day a week from his home in Queens to the university in Bethlehem, PA, to give private lessons on both acoustic and electric basses.
The Mark Wade Trio’s gigs at Club Bonafide in Manhattan, Flushing Town Hall in Queens, and other venues have greatly increased since the release of “Event Horizon”, and Wade’s own raised profile resulted in his landing a spot in the 2016 DownBeat Readers’ Poll as one of the year’s Top 10 bassists. He was recently voted in to the poll again in 2018.

The ensemble had its first appearance in Europe in late 2017, including a performance at the Sunside Sunset Club in Paris. Interest in the trio’s music was sparked in Europe when the Edition 46 label in Berlin reissued “Event Horizon” a year after Wade released it himself in the U.S.
Wade does not take for granted the rapport he, Harrison, and Neumann have established, which is evident in their ability to flawlessly navigate consistently challenging original compositions and arrangements in a flowing, unforced manner. “I’m really lucky that I have guys to work with to put this together,” Wade says. “I’m only one-third of the sound. It takes all three of us to make it happen, and they do a really great job with it. We’ve been able to develop a certain kind of language together that helps bring out something deeper than just your average run-of-the-mill trio that you might throw together at a session.” (press release) www.markwademusicny.com
Gabriella Ruggieri for 1blog4u
visit the Gallery
40.712775 -74.005973
New York, Stati Uniti