What a pleasant surprise it was to wander around Milan, discovering Quartiere Arcobaleno. It is a small neighborhood that seems to come out of a fairy tale. A district out of ordinary. Rainbow district (Quartiere Arcobaleno), this nickname derives from the wide range of colors on the houses facades. Via Lincoln is probably one of the most unexpected neighborhood in Milan (at the coordinates of Via Lincoln and Via Franklin): not far from Piazza Cinque Giornate and Corso XXII Marzo there lies this urban fairy tale village, made of colored small houses and enchanted silent corners. This area was designed by a cooperative of workers at the end of the 19th century to be a Garden District made of small, affordable houses to host Porta Vittoria railway qualified workers. 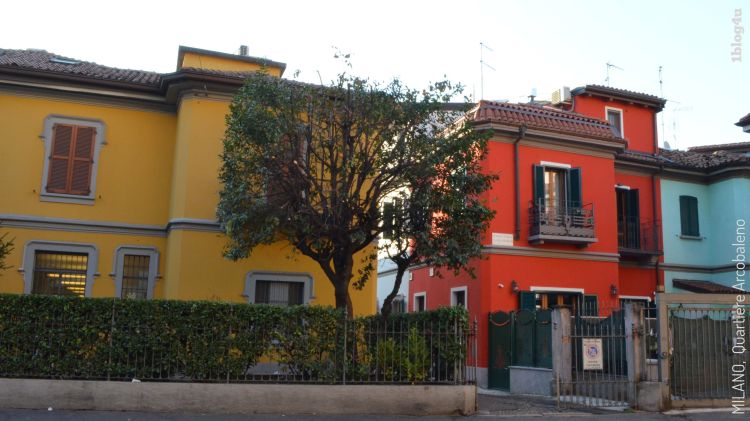 At one time they were established as workman‘s homes (the project, coordinated by the SEAO, Building Society for Workman’s Housing, began in far off 1889 when the first single family, multi-level housing project for workers was accomplished, destined to workers, artisans and employees) and have now become the stuff that dreams are made; having a house with a garden just a few steps away from the Duomo. Unfortunately, the two world wars upset this plan and the district remains enclosed at Via Lincoln; now this street seems like an oasis in the midst of the hectic pace of Milan. It’s fantastic to imagine a large area of the city full of colorful houses surrounded by gardens sprouting roses, fruit trees and fragrant flower beds.

Today the houses are as beautiful as never before: plants rise behind the thin metal gates of the coloured structures, giving the impression that you just entered a fairy-tale book. Isn’t unusual to see a cat that’s walking slowly here and find refuge behind a wrought iron gate. A little neighborhood scattered in a metropolitan handkerchief on a road that should be enjoyed by foot, to be teletransported to another dimension that is nothing short of Notthing Hill.

If you ever happen to walk by Via Lincoln in Milan remember to take a small walk through one of the most strange and amazing districts of the city!
Gabriella Ruggieri for 1blog4u