LASVIT brought to the Euroluce 2019 the exhibition called The Theory of Light, derived from the investigations into the formation of light through Reflection, Perception, Spectrum, and Nature, and presented in outstanding installations that fuse the science of light and human creativity.

LIANA
Designer: Maxim Velčovský
A swarm of fireflies can lighten up a meadow, the amazing jellyfish can shine even in the middle of a dark ocean, and special types of mushrooms often glow in the forest. Maxim Velčovský studied bio-lights and tried to “capture it” in a special metal net. The overall piece resembles a tropical vine, hence its name: LIANA means ‘vine’ in the Czech tongue. Velčovský’s LIANA can be optimized for any space.

TRACES
Designer: Katarína Kudějová Fulínová and Kateřina Handlová
The installation was inspired by the cosmic nebula, a giant cloud of dust and gas in space that can enhance the refraction of certain colors and light, and which is in a state of permanent flux.
Is it possible to express yourself through light? Can we transform our emotions into a ray of light? Do emotions possess color? Those were some of the questions which Katarína Fulínová, and Kateřina Handlová raised while conducting their experiment which charts the viewers’ emotions through light and color. By means of their sophisticated interactive artwork, they allow the viewer to become co-creator of a spectacular installation. Everyone can become a designer for a while and leave a lighting trace written in glass and light. 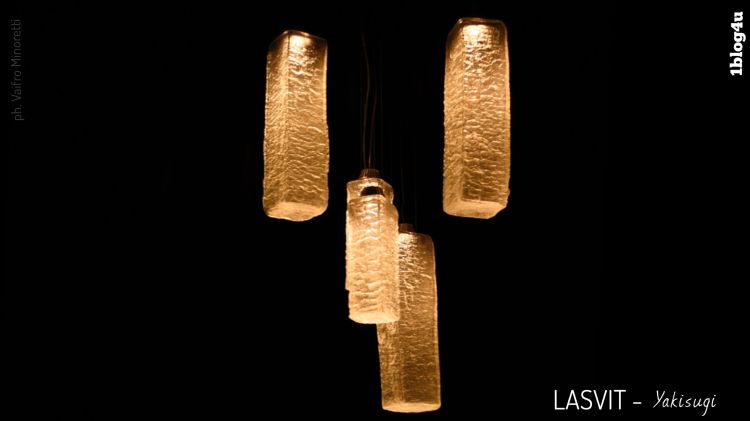 YAKISUGI
Designer: Kengo Kuma (Kengo Kuma & Associates)
The renowned Japanese architect drew his inspiration from a technique for preserving construction timber by charring its surface, known in Japan as Shou-Sugi-Ban or Yakisugi. This ancient technique uses charring wood as means to preserve it without the need of painting or sealing, an aspect leading to the current revival of this technique in eco-friendly architecture. Adapting this process to the centuries-old glass craft technique enabled a contemporary design that is unique for every single piece of hand-blown glass.

DE-LUX-ITY
Designer: Wanda Valihrachová
Everyone knows the basic facts about light and its color spectrum, but what if one wants to catch and preserve its color spectrum in glass? An experiment capturing the colour spectrum by different glassmaking techniques resulted in DE-LUX-ITY. The designer, Wanda Valihrachová, used colour coding as well as surfaces and their colour features, finding original inspiration in street art.  The installation called DE-LUX-ITY is kind of unparalleled, unrepeatable and unique glass graffiti.

AURA
The experiment with reflection was led by Mária Čulenová (Associate Professor of Light Diffraction).
Her lighting installation, called AURA, is inspired by the moon – the best representative of light reflection phenomena in the universe. “We say “moonlight,” but it is only the reflection of the Sun we see. Everything we know about the size, surface and phases of the moon, we had learned thanks to this reflection”. AURA showcases the individual phases of the moon and Mária Čulenová used hand-blown glass to create its shape.

CRYSTAL ROCK
Designer: Arik Levy
Certainly not from the Stone Age but closer to the fictional Kryptonite, CRYSTAL ROCK appears in the cave of the future as an ambassador to the fusion of nature and man, light and reflection, transparency and mass. All these characteristics are gathered within a perfectly cut, yet roughly sculpted contemporary silex. Its multiple reflections and deflections fascinate onlookers during the day and even more at night, when lighted.

GLACIER
Designer: William Pedersen (founding design partner of Kohn Pedersen Fox Associates (KPF)
One of the earliest inspirations for this chandelier dates back to William’s expedition to Ellesmere Island, where he trekked over glaciers. When he chopped chunk of ice for drinking water and looked at it, a freshly-hacked ice had somewhat the same visual quality of cast glass. The GLACIER lighting is a piece of winter beauty, ideal for exhibition inside a house which can withstand any change of season.

NEVERENDING GLORY
Designer: Jan Plecháč & Henry Wielgus (Jan Plecháč & Henry Wielgus Studio)
Jan Plecháč and Henry Wielgus sketched the shape of the Lasvit NEVERENDING GLORY chandeliers by rotating the silhouette around its own axis. The large pieces of glass, for which even the wooden moulds are enormous are so demanding to produce that it would not be possible to create anything bigger. In the individual silhouettes, it is possible to recognize iconic chandeliers from five of the world’s most eminent concert halls and theatres; La Scala in Milan, Palais Garnier in Paris, the Metropolitan Opera in New York, the Czech Republic’s Estates Theater in Prague, and the Bolshoi Theater in Moscow.

CIPHER
Designer: Yabu Pushelberg (Founded in 1980 by George Yabu and Glenn Pushelberg, the Yabu Pushelberg design firm is now one of the most recognized design firms worldwide).
CIPHER collection is a juxtaposition of heritage techniques and contemporary form. Its delicate hand-blown crystal cylindrical pieces are cut with clean, clear lines. Light emits only from connection points and the sources are ingeniously hidden to soften the overall effect. With components arranged in series and joined by polished champagne-gold finished connections, CIPHER’s overall linear form creates a poetic visual rhythm. As a system, the CIPHER collection is extremely flexible and customizable, with limitless possible configurations for private residences and bespoke installations projects.
(Thanks to www.lasvit.com Press Office for the welcome and kindness)
Gabriella Ruggieri