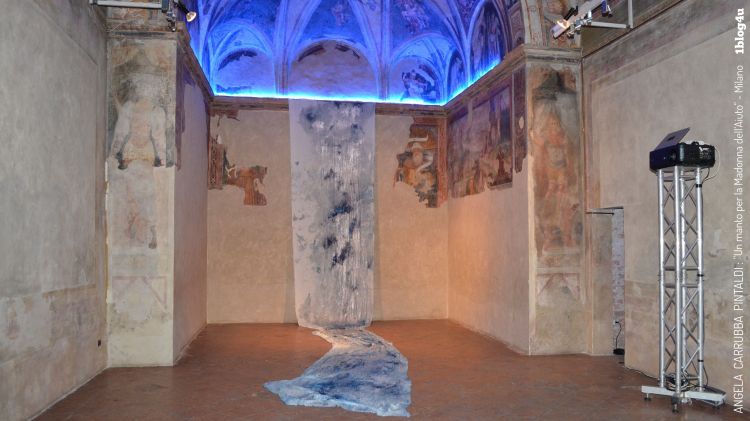 The cloth, lightweight and sprinkled with blue pigment and silver dust, was complemented by a video by photographer Giovanni Gastel as integral part of the work, showing all phases of its creation. This performance, which investigates through the artist’s gestures the themes of religiosity and the desire for spirituality, is one of the stages of “Mater”, a traveling project that Angela Cerrubba Pintaldi developed around the figure of Our Lady and which initiated in Trapani in 2012. 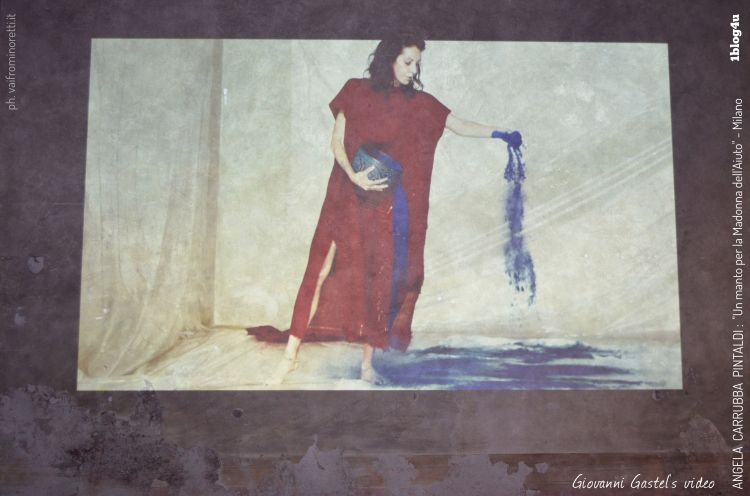 Since that year, the artist has created several mantles, exhibited in various places of Marian worship in several cities: in Rome, in the basilica of St. Mary of the Angels (2013); then two exhibitions in Naples, one at the Church of San Giuseppe delle Scalze in Pontecorvo in 2015 and then another at the Church of the Pio Monte della Misericordia in 2016, where the mantle was displayed on the altar next to the painting by Caravaggio “The Seven Works of Mercy”.

Travel, discover, learn, be inspired without losing her own Sicilian roots: these are some of Angela Carrubba Pintaldi’s peculiarities that make her a cosmopolitan artist, not limited by ethnic, cultural or religious identities.

The artist, born in Siracusa on the island of Ortigia in 1960, experienced fame at the international level immediately her first creations.

At first, she exhibited at the sophisticated Joyce’s Gallery in Paris; then at Bergdorf Goodman in New York. Her works were listed in Sotheby’s and Christie’s catalogues; then there were exhibits from Milan to Paris, from London and back to New York.

From the Big Apple, thanks to Christie’s catalogue edition of December 10, 1997, began Angela Carrubba Pintaldi’s long journey in international social engagement, that has now become her signature style, where art marries humanitarian action. 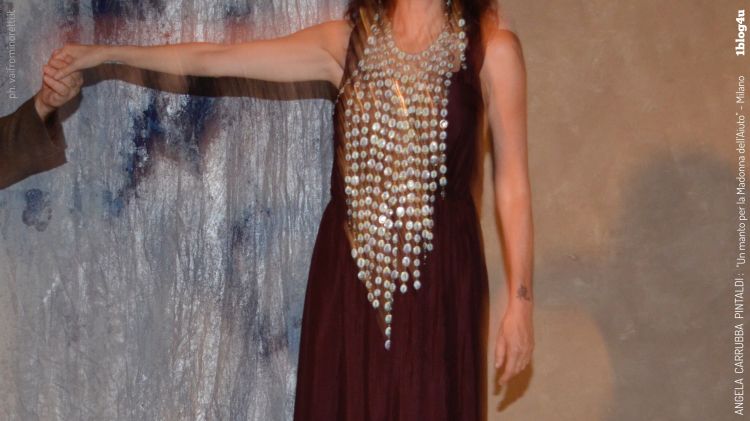 At that time, she helped a number of children affected by thalassemia; more recently, with her exhibit at the Armani Theater in Milan, she gave 60 children the opportunity to receive treatment and lead a full life.

While extending a helping hand to all the ethnicities she meets while exploring their particular artistic expressions, she keeps finding in her international collectors the support that reaffirms the value of her work.

Through the years, Angela Carrubba Pintaldi was portrayed by famous photographers such as Sarah Moon, Brigitte Lacombe, Ferdinando Scianna, Fabrizio Ferri, Tyen, Leo Matiz, Heinz Schnatter and Giovanni Gastel. In fact, Angela is able to combine the strength of her creativity with her own image.

During the latest event in Milan, Angela Carrubba Pintaldi wore her signature piece: an imposing necklace, similar to a soft net, that covered her bust all the way down to her waist, made of hundreds of small porcelain pendants with images of the Virgin Mary, representing various forms of Marian worship.