Chad Wackerman has played DW drums since 1982, and his music has inspired and entertained people the world over. He is respected and admired for his phenomenal playing and a remarkable body of work which includes a seven year association with Frank Zappa, as well as work with Allan Holdsworth, Barbra Streisand, Steve Vai, Andy Summers, Dweezil Zappa, James Taylor and John Patitucci among many others.
In November, Chad’s wife of 28 years, Naomi Star, passed away after fighting cancer. Chad and Naomi met on tour in 1985. Naomi was a professional singer in her own right, having worked with The Moody Blues, Belinda Carlisle and Neil Sedaka among others. 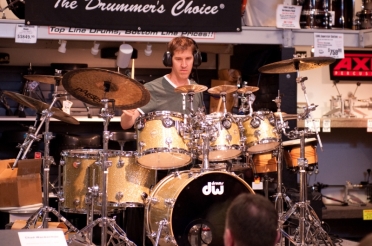 Chad is now left to care for their 2 children, one of whom has a disability. So that Chad can tour again, he will have to hire a 24/7 caregiver for his child with special needs as well as a nanny for his other young child. The combined costs of the medical bills, funeral expenses and caregiver are a tremendous financial burden.
In response, DW is donating some very special drums for sale with 100% of the proceeds going directly to the Wackerman family.
In addition, if you would like to make a small donation to help the Wackerman Family Fund, DW will send every person who donates a minimum of $20.00 a DW decal sheet as a thank you for your generos

For more information and to donate visit: http://youcaring.com/chadwackerman

Please join DW Drum in supporting Chad Wackerman #drummer and his family during this time of need!
#SergioBellotti and #GabriellaRuggieri for #1blog4u